In this section, we will learn what the Prototype is and how to use it in JavaScript.

Functions are a sub-type of objects. This means we can add a property to them and invoke that property at later times.

The `boo()` is a function in this example but as you can see, we used the `boo.fullName = “John Doe”;` statement to add a property to this function and assigned a value to that property as well.

So in the statement:

When we used the `boo` function to get the `fullName` property, the execution engine checked the list of properties of this function and saw the property. So it sent its value to the browser’s console.

You should know that any function in the JavaScript has one property named `prototype`. The value of this property is an object. So basically, the `prototype` property represents an object.

Inside that object there’s a property named `constructor` that has the memory address of the related function as its value (related function is the function that this prototype object belongs to).

Here, the function `boo` has the `prototype` property automatically added to it.

So just to make it clear, there’s no difference between calling the `boo` function like `boo()` and `boo.prototype.constructor()`. Both result in invoking the body of the same function.

We will explain this part in just a moment, but for now just remember the object that the `prototype` is referring to is linked to another object as well.

Now let’s start from the origin to understand this linked relation (AKA inheritance).

Before the execution of the first line in our program, JavaScript automatically adds one function named `Object` to our program.

Since the `Object` is a function, it has the hidden property named `prototype`.

This property, of course, is linked to an object and inside that object there are multiple properties, including the one that is called `constructor`.

Starting from the top level, we mentioned that object function has a property named `prototype` and this prototype represents an object.

Inside this object there are multiple properties and one of them is called `constructor`.

The `constructor` property has the memory address of the `Object` function.

So invoking the `constructor` property like `Object.prototype.constructor()` is the same as if we’ve invoked the `Object` function itself like `Object()`.

Note: besides the `constructor` property, the prototype-object of the `Object` function has other properties as well, but in this section we don’t need to learn them. We’ve explained them in the Object Constructor section.

We also know that each function that we create in JavaScript has a property named `prototype` and that is also an object which has only one property named `constructor`.

The next thing we should know is that, by default, the prototype object of each function is linked to the prototype of the `Object` constructor function.

We will get into this “link” part in just a moment.

You should know that objects that we create are also linked to a prototype object, but: 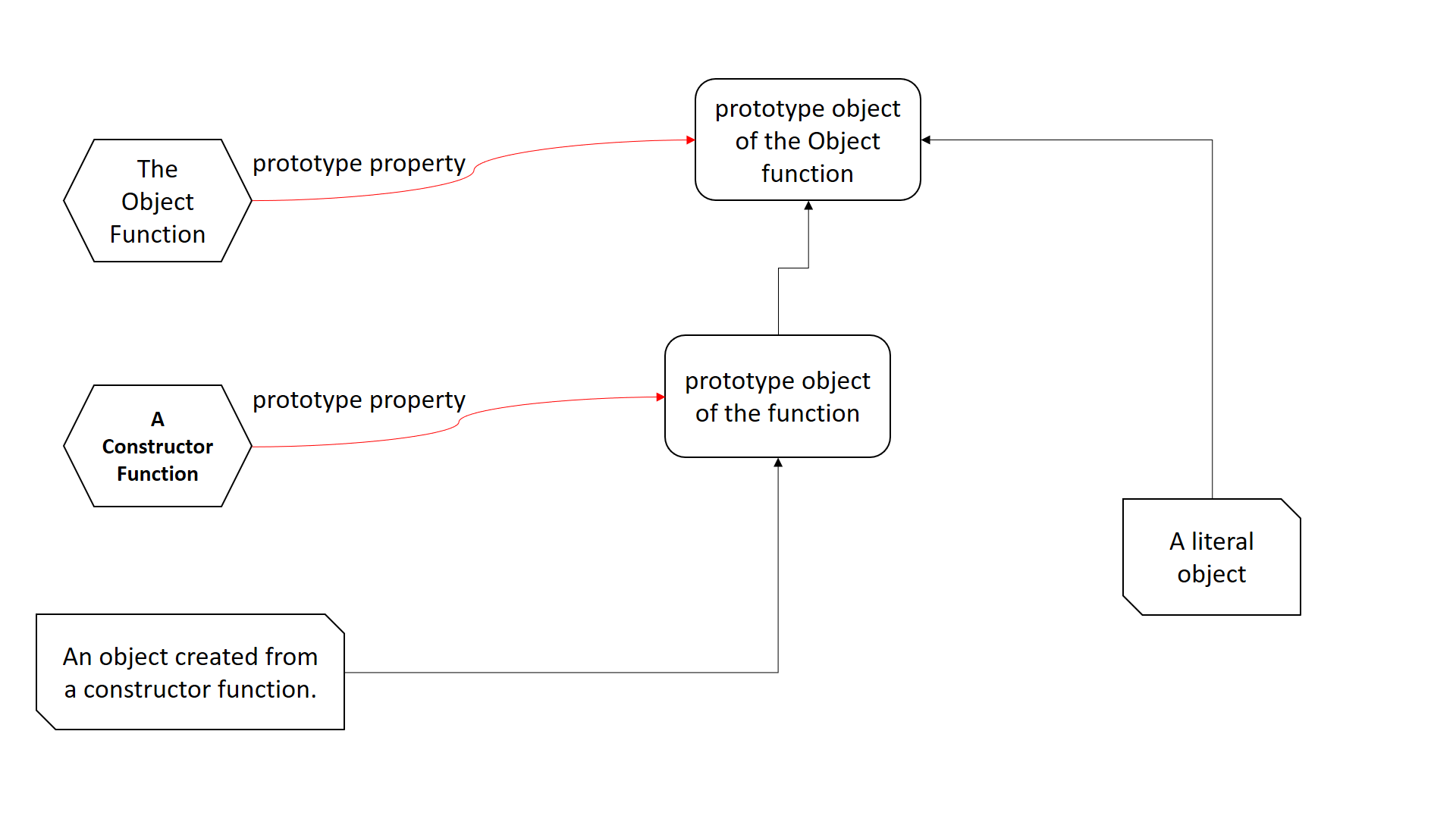 The diagram above shows how each function and object in a program finally is linked to the prototype object of the `Object` constructor function.

So now the question is: what does this link do, actually?

When we invoke a property of an object:

This is called inheritance in JavaScript.

Note: inheritance is a concept that was created in the world of Object-oriented programming languages like Java and C# etc. but what you saw here is not specifically inheritance! Though because the concept of inheritance is a known model and people usually can relate to it more easily, the term “inheritance” is also used in JavaScript.

But you should remember that the reality in JavaScript is that there are just links between objects and functions! There’s no such thing as inheritance in JavaScript.

As long as you stick to this linking model, you’ll face no trouble at all.

The constructor function, `Person` is an empty function. So essentially creating an object from this function will result in an empty object.

But in the prototype of this function we’ve added two properties named `firstName` and `lastName` via the two statements below:

So besides the `constructor` property, the prototype object of the `Person` now has these two properties as well.

After that, we create a new object via this constructor function and stored that in the `prs` variable.

As mentioned before, an object that is created from a function has a hidden link to the prototype object of that function.

This means the object that we’ve created and stored in the `prs` variable has this link to the prototype object of the `Person` function.

Now let’s see what will happen when we call the `prs.firstName` in the statement:

The next statement is `prs.lastName` in the:

This statement is also treated the same way. This means the execution engine will look into the `prs` object and searches for a property named `lastName`. But because there’s no property here, it will look into the prototype object of the `Person` function. In that object, because this property is declared, it will use its value and send the result to the browser’s console.

Also, if we create an object literal, it will be directly linked to the prototype object of the `Object` function.

So basically an object literal has the access to the properties of the prototype object of the `Object` function and can use those properties if it didn’t override them.

You should remember that the search of the execution engine starts from the object itself. If the object itself didn’t have the target property, in that case the engine will use the link to search the next prototype object and so on.

Here the `prs` object has one property, and that is `firstName`. Also, the prototype object of the `Person` function has the same property.

Now when we ran the statement `console.log(prs.firstName)`, because the `prs` object already has such property, the execution engine will use the value of this property instead of going into the prototype object of the `Person` function.

Alright, just to be clear, the prototype object of a function is shared between all the objects that are created from that function. 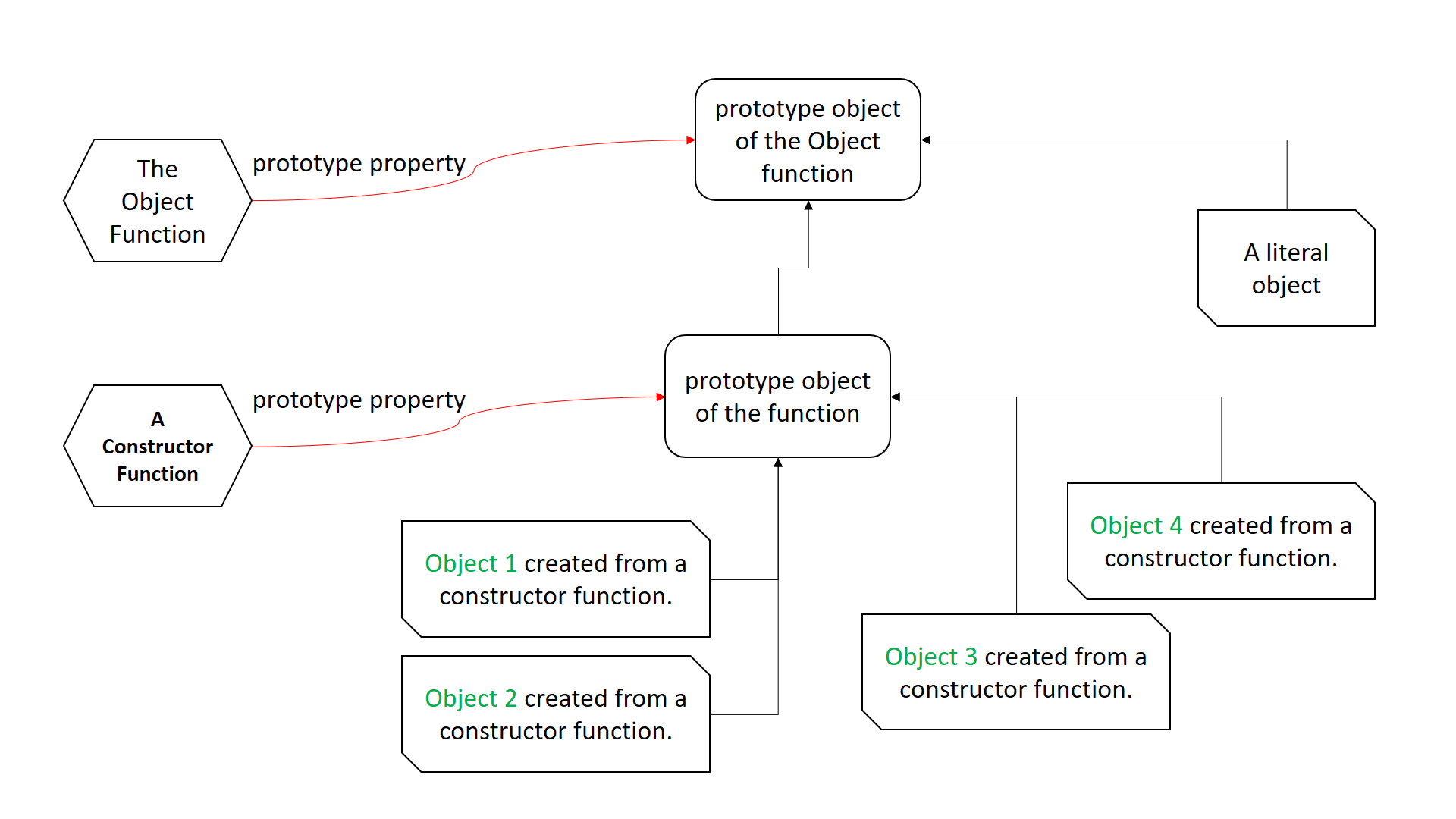 This means if one object changes the property value of a shared prototype, object; the other objects can see that change as well.

What is __proto__ in JavaScript?

First of all, in order to access the properties of a prototype object via the object that is created from that function, we use the dunder proto.

In this example, we used the `prs` object to access the prototype object of the `Person` function via the duner proto. After that, we’ve changed the value of the `firstName` property to `Omid`.

This is the statement:

Now when we use the `prs2` to get the value of the `firstName` property, we got the value `Omid` instead of the previous value, which was `John`.

Basically, each call to the dunder proto will move one level up the chain.

We use cookies on our website to give you the most relevant experience by remembering your preferences and repeat visits. By clicking “Accept”, you consent to the use of ALL the cookies.
Do not sell my personal information.
Cookie SettingsAccept
Manage consent

This website uses cookies to improve your experience while you navigate through the website. Out of these, the cookies that are categorized as necessary are stored on your browser as they are essential for the working of basic functionalities of the website. We also use third-party cookies that help us analyze and understand how you use this website. These cookies will be stored in your browser only with your consent. You also have the option to opt-out of these cookies. But opting out of some of these cookies may affect your browsing experience.
Necessary Always Enabled
Necessary cookies are absolutely essential for the website to function properly. These cookies ensure basic functionalities and security features of the website, anonymously.
Functional
Functional cookies help to perform certain functionalities like sharing the content of the website on social media platforms, collect feedbacks, and other third-party features.
Performance
Performance cookies are used to understand and analyze the key performance indexes of the website which helps in delivering a better user experience for the visitors.
Analytics
Analytical cookies are used to understand how visitors interact with the website. These cookies help provide information on metrics the number of visitors, bounce rate, traffic source, etc.
Advertisement
Advertisement cookies are used to provide visitors with relevant ads and marketing campaigns. These cookies track visitors across websites and collect information to provide customized ads.
Others
Other uncategorized cookies are those that are being analyzed and have not been classified into a category as yet.
SAVE & ACCEPT